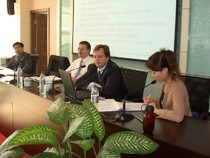 Climate change and environmental degradation are among the most important challenges of the 21st Century. In 2007, the Intergovernmental Panel on Climate Change (IPCC) in its Fourth Assessment Report states that world temperatures according to the scenario assumptions set could rise by between 1.1 and 6.4 °C during the 21st century leading to sea level rises, more frequent warm spells, heat waves and heavy rainfall, and an increase in droughts, tropical cyclones and extreme high tides. On 9 May 2013, for the first time since measurements began in 1958, the daily mean concentration of carbon dioxide in the atmosphere of Mauna Loa, Hawaii, surpassed 400 parts per million (ppm). A 400ppm CO2-concentration of the atmosphere is seen as the lower boundary for reaching a global warming of 2°C with a low probability.

To encounter these challenges, different mitigation and adaptation measures have to be taken. Mission of China Environment Research is to undertake research in these fields and actively develop strategies for the future as policy consulting. The fields, inter alia, include